“In essence, automatic drawing is considered a means of expressing the subconscious . . .”

These are drawings I made with ballpoint pen on paper in 2019.  I created these drawings with an almost intuitive method of letting my left hand glide across the surface of the paper for a steady length of time. Working with ballpoint pen allows for these passages without having to pause (as one would do to sharpen a point of a pencil).  In a more frenzied state, I have broken the pen tip spilling its ink.  In hindsight, I see this approach as relative to the practice of automatic drawing or automatism which was pioneered by late 19th to early 20th Century occultists and artists of the dada and surrealist movements.

In essence, automatic drawing is considered a means of expressing the subconscious by allowing the artist’s hand or body to let loose in an unrestricted manner, uninhibited by rational control or internal thoughts.  Psychic mediums have used this method in seances to contact or transmit messages from spirits or other mystical forces.  While I confess to not be consciously attempting those goals, seeing complex forms blossom-forms that for me defy literal or explainable comparisons, reveals perhaps the purest depictions of my inner psyche.  After analyzing these results at a later time, I do define certain areas on the page that I find interesting or suggestive.

“. . . drawing as a means of sexual and psychic release.”

When a predetermined framework is established, and this approach is applied, other factors come into play. The drawings depicting male figures were born during a “drink and draw” salon at a gay bar/nightclub with loud music and colorful lighting.  Sitting side-by-side in a semicircle with other artists, this type of event places equal emphasis on social interaction (two drinks are included with the price of admission) as it does with creating artwork.  Observing the nearly nude male model, who at times is outfitted with provocative fetish accessories in this setting, transmits a high level of arousal not found in a traditional classroom.  I start with pencil, generally with some trepidation as staying focused in this intoxicating atmosphere can be a challenge.  Upon bringing the drawings home, I then go over them freely with pen. I consider this a way of being intimate and caressing their bodies privately, and in connecting with them spiritually, by giving up my pent-up erotic desires through drawing as a means of sexual and psychic release. 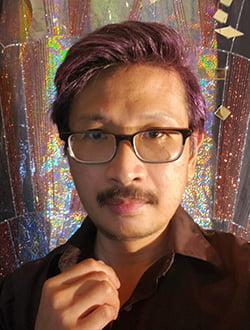