“. . . Spirituality has been described as a kind of technology, similar to the valve, keeping at bay artifice, machinic will and nihilism . . .”

In the creation of artwork, one has an opportunity to instantiate a fleeting ontology. There is a revelatory quality to find as one peers into the lacunae of consciousness, where the pen meets the paper, asking a “what may be” to become vivid.  Each mark of essence balances freedom, accident, will and directive in delicate proportions.  Possibilities are as boundless as our imagination for their actions, and thus it articulates as magic: as the most lucid dreaming, the vital potentiating medium we imagine ourselves to wield.  And so, as artists, we do.

Art, as magic, may explore the boundaries of plausible actions, and there leave trails to navigate universal microcosms of life lived unseen and lived.  In acts of art and magic, a prima materia congeals to reveal the ley lines of our humanity, and thus it is underpinned by an ethical dimension.  Spirituality, for me, is holding faith in the meaning of the way these forms come together, either in life or in art, and seeking to establish greater connection to it.  I consider this process to arrive most effectively when imagined as a binding agent for the divine, which feels a bit like love.

“. . .the most lucid dreaming, the vital potentiating medium we imagine ourselves to wield. “

I’ve found various methods for heightening my own spiritual connection with my work, and my practice has developed several pillars.  Some that return again and again are: faith (in archetypal structure, the shape of story, the essence of shared meaning), synchronicity (pairing unresolved signs to find new meaning that accrues in the fractal graph of God’s breath), and temporality (remaining aware and seeking clarity of here and now, the mundane world and the currents of humanity).  I also seek ways to heighten my own belief in the objects I make, including rituals, mantic process and phenomenological interactions with place and material.  While this kind of invention is enjoyable and therapeutic, helping me make sense of the world and my place in it, I also do consider the practice (not just mine, but that of many artists dabbling in similar frameworks) to be culturally constructive.  Spirituality has been described as a kind of technology, similar to the valve, keeping at bay artifice, machinic will and nihilism, while introducing a morality that can be centred on humanism, reflection and ecology.  In the age in which we find ourselves, this has become an ever more vital endeavour. 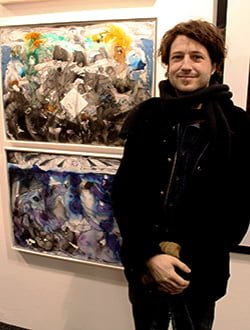