At this point in my life, I’ve circled back to creating objects and see clearly the identifying factor of magic as flux, as it’s magic’s ability to transform artistic content in material. These materials in my work, currently boil down to forms created out of clay whose body and surface is vitrified through firing; plant material woven into my object-making in dream work, active imagination and reality in the garden from seed, to growth, to death and finally the undead quality of scent that lingers in the dried plant leaves, roots and bones. The forces continue on through unconscious interplay, thought waves – spiritual and others, as well as the reincarnation of some plants to re-engage in this pattern with the world again and with me again through the cycles of life through the change of seasons in the Northeast. The plants weave into the sculptures in many ways, some but not all are visible to the eye.

“The forces continue on through unconscious interplay . . .”

In one current work I’m creating the shudder of vulture wings in clay, an ode to the predatory birds my wife (Karen Heagle) creates through painting and image making. My sculpture, with the working title, Secret Passageway, though an abstracted version of this shudder, is a direct line to shadow work and the circle of life, and also the container for Persephone’s path to the underground in winter and subsequent separation from her mother. This work will hold, once completed so many dried Artemisia Vulgaris and Absinthium plants inside her through secret doors like puzzle pieces that are integrated into the architecture of the sculpture. This work is in direct relationship to the conversations with my mentor and collaborator Kay Turner in her work and projects with the myth of Persephone in her role as performer and folklorist.

The dried elements of the Artemisias that live through her intoxicating scent – a scent – as in Artemisia Vulgaris – that goes right into the witches’ nose (Kay Turner)[1] and into her brain, transmission to the dream realm and direct down Hecate’s path. I see this transference as the interplay of magic and the attempt to unite the magical intension into reality, the “real world”. Not to say that I won’t make magically empowered images again, but for now I am focused on the power of my magic to connect to other beings through the stealth and identity with the real world, as an object in the world that can be touched, felt, sniffed and at times picked up, imprinted and able to receive the information given.

[1] What a Witch, Part 6; Before and After: What the Witch’s Nose Knows That Andy Warhol’s Nose Doesn’t Know; Conceived and Directed by Kay Turner in partnership with photographer Rosina Lardieri, assisted by Maxine Henryson, Zhenya Merkulova, Amanda Weil, Lily Koppel, and Erick Benavides 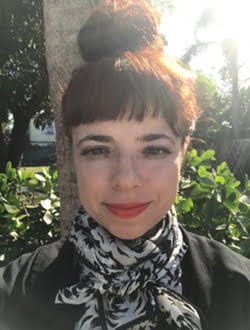