Marjorie Cameron was born in Belle Plaine, Iowa in 1922. The fiery and uncompromising character for which she would later be known manifested from an early age. School friends and teachers alike defined her as a peculiar child who by nature looked at the world from a different angle. After the outbreak of the Second World War Cameron enrolled in the Navy and after a period of training became a cartographer for the Joint Chiefs of Staff. Discharged from the military in 1945, she joined her family in Pasadena, where less than a year later she met the man who would change her life.

Cameron was twenty-four when she met Jack Parsons, a young and charismatic rocket scientist at the peak of his public career, associate founder of the Jet Propulsion Laboratory and acting master of the O.T.O. Agape Lodge. For the following seven years Cameron and Parsons worked together in magick, love and art, giving birth to one of the most legendary magico-artistic partnerships of the century. Firmly believing that Cameron’s appearance in his life was the result of an intense series of magical workings carried out in the weeks preceding the encounter, Parsons famously wrote to Crowley, ‘I have found my Elemental’. In the first years of their relationship Cameron was not only unaware of such goings-on but also uninterested in Jack’s spiritual path, preferring art and love over the practice of magic.

But as time went by Parsons assumed another function in Cameron’s life as he gradually became her magical mentor. He renamed her Candida, recommended books, prescribed rituals and meditative practices to deal with her depressions. When Jack Parsons died in an explosion at the age of thirty-seven, Cameron was left alone, wondering whether she was human or not.

A very dramatic period follows for Cameron. For a time she withdraws into the desert, where she attempts to connect with the spirit of her lost lover through a series of magical workings. A few years later she comes back to Los Angeles, where in 1954 she appeared in Kenneth Anger’s landmark film Inauguration of the Pleasure Dome. She also met the director Curtis Harrington, for whom she appeared as herself in the short film Wormwood Star. In 1955 she was featured on the cover of the first issue of Wallace Berman’s artistic and literary journal Semina, so marking her firm arrival in the Hollywood artistic counter culture.

Cameron spent the last decades of her life in West Hollywood, painting, writing and mastering the art of t’ai chi. She died of cancer in 1995 at the age of seventy-three. 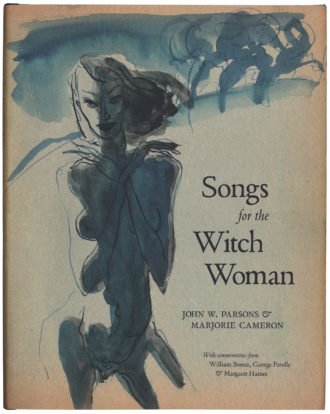